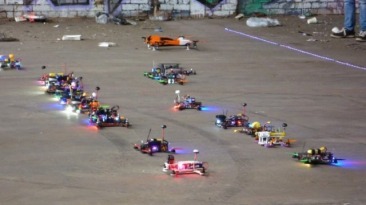 Drone racing has been around for a number of years now, but recently it has picked up more national and international attention both in the popular conscious and though media outlets. In the last few days alone, CNBC and SB Nation (unfortunately the author of the SB Nation article used way too much time trying to integrate the politics of drone warfare into the story, which is really unfair to drones racers!) have ran articles about the growing popularity of the sport.

The new sport is definitely taking off. Drone racing is now shown on ESPN and various leagues and local organizations are popping up all around the world. A good example of this is FPV Racing Ireland. The Dublin, Ireland based drone racing club started with 5 members two years ago, and now has over 800. They have expanded so quickly they just asked the Dublin City Council to help them find safe places to fly. Across the Irish Sea the first drone racing arena in the UK opened in the English city of Nottingham. The 25,000 square foot facility has a beginners area and a track set aside for professional racing.

Back in the US, the Drone Racing League (DRL) that is leading the way. They are the ones that signed a deal with ESPN last September. Their pilots, courses and production capabilities are second-to-none. In the recent article on SB Nation the CEO of the DRL, Nick Horbaczewski was quoted as saying he wants his league to become “the Formula One of drones”.

If you are interested in seeing how this sport is developing be sure to check out the DRL Allianz World Championship this June. The competition will pit 16 of the world’s best drone pilots against each other in a 6 race circuit for the right to be crowned the DRL 2017 World Champion. It will be aired on ESPN, Sky Sports, and Prosieben MAXX.