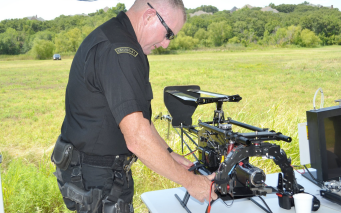 A new bill is being considered in Connecticut that would allow police in that state to arm drones with deadly weapons. If passed, Connecticut would be the first state to allow drones to be armed with deadly weapons. (North Dakota has allowed police to use drones armed with “less than lethal” weapons since 2015) This proposed law was picked up by numerous news sources and is getting a lot of attention on social media.

Some are worried that this could be a turning point that starts to fill American skies with armed police drones. Drone Dossier understands that this law could set a important precedent for use of armed drones but it may be too early to accurately know the potential impact of this bill. For example, the bill could fail and set an example for states not to arm drones. Also, the bill does not explain how the drones will be armed, or what kind of drones will be used. Most of the drones that police departments around the country are acquiring are commercially available drones that are not designed to be weaponized.

If passed, it appears Connecticut is planning only a minor role for weaponized drones. State Senator John Kissel said, “Obviously this is for very limited circumstances. We can certainly envision some incident on some campus or someplace where someone is a rogue shooter or someone was kidnapped and you try to blow out a tire.”