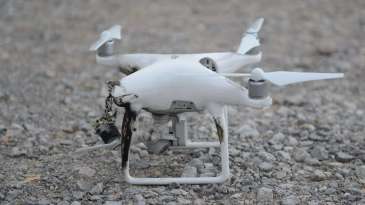 Recently conflicts in the Ukraine and Syria have clearly shown the danger that small drones (UAVs) can pose to military units on the ground. To adapt to this threat the US Army has been testing a Stryker Infantry Carrier Vehicle that has been refitted with a laser and electronic countermeasures that can track and disable drones.

High-tech cameras and jamming devices can detect drones, track them and even disable them. If for some reason the drones still keep on coming the Stryker is equipped with a Mobile High Energy Laser (MEHEL) that lets it blast the drones out of the sky. In two test sessions the laser-equipped Stryker was able to successfully blast over 50 drones out of the sky—a number beyond what was expected. Besides shooting down drones, the army also plans to use the laser to blow through defenses and even stop incoming rockets and artillery shells.

While there are more cost effective anti-drone technologies, the Stryker’s ability to identify, track and disable a drone with a single platform could make it a useful tool to protect soldiers from the threat of drone strikes.